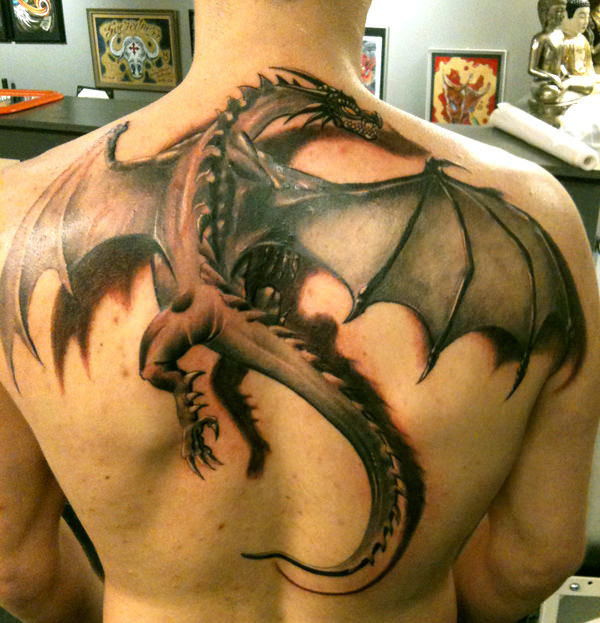 Dragon tattoos are undoubtedly a classic. When we imagine a tattoo of a dragon, a…

Dragon tattoos are undoubtedly a classic. When we imagine a tattoo of a dragon, a huge tattoo comes to mind. So if you are here without a doubt it is because you are so brave. From here below you can access galleries with hundreds of images of dragon tattoos. Navigate between the pages and click on the ones you like the most to see them larger.

Dragon tattoos are a classic

For a long time ago, the figure of dragons has always been present in the culture and mythology of a great variety of peoples and cultures. In some cases they were revered as deities, in others they were rather feared. But the truth is that it is one of those mythological creatures that are found within the imaginary of humanity.

It is quite impressive the fact that as the ages progress, this is one of the creatures that does not change much and that does not end up disappearing, even today it remains the object of admiration and source of inspiration for many artists. The truth is that the fascination that humans have for mythological beings and especially for dragons is undeniable.

This can also be extrapolated to the world of tattoos, since since this practice existed in different peoples and regions of the world, the figures of dragons were present.

The truth is that dragon tattoos are quite popular and these never stop appearing on the skin of all those tattoo lovers.

This time we are going to be reviewing a little the different most popular models of dragons that are in this little world, and above all we would like to tell you a little about the different types of dragon tattoos that you can find and some of their meanings. Let’s get started!

Dragons are considered to be strong and huge mythological creatures, which throughout history have been both admired for their incredible beauty and feared. One of the most common representations of dragons is with a body similar to that of a snake, but certainly with many more details than those on the face.

One of the most representative characteristics is their ability to fly, this they manage to do despite not having wings in many of the designs and representations, it is simply accompanied by clouds below their torso.

With the passage of time, the display of dragons has constantly changed, the design we were talking about previously may be due more than anything to a Japanese representation or more of an Asian cut in general.

But it was certainly in this region that this mythological creature was born, that is why the styles of dragons, both Chinese and Japanese, are quite sought after and admired. Depending on the dragon, many of them can mean peace, fortune, good luck or are used to inspire courage and courage among warriors, they can also be considered as symbols of protection.

All this meaning can be extrapolated in tattoos. It is quite common to see how people choose very different dragon tattoo designs from each other. Since each of them represents a different thing for each one.

One of the most important dragon tattoos that you will be able to find is that of the Japanese. This is a mythological animal that is strongly linked with Japanese custom and culture.

They are considered as aquatic creatures, although it is said that in ancient times they could soar through the skies and fly freely. According to the culture of this country it is said that the first Japanese emperor was a direct descendant of a dragon.

Dragon statues, seals and ornaments are used to protect against evils and keep them away from our loved ones, as well as for the protection of the home in general, they are also used to denote a status of power and represent longevity.

There are four great designs within Japanese art to represent dragon tattoos. There is the Sui-Riu, which is considered the king of dragons and is capable of controlling the rain. On the other hand we have Han-riu, this is the largest of all and you can see him completely covered in stripes.

There are also the Ka-riu, these are smaller and are characterized by having a fairly strong red color in their scales. And finally there are the Fuku-Riu, these are quite common to find in tattoos since it is associated with calling luck and good fortune.

On the other hand we also have the boy-style dragons that also have a strong connotation of divinity. There are the horned dragons, this symbolizes strength and physical and mental strength, very common to see in the leaders of ancient times.

There are also the yellow dragons, these do not have horns and instead of strength they represent knowledge and wisdom. We have the earth dragons, these are associated with strong-willed people who tend to set the rules of the game. And finally the celestial dragons, these symbolize a lot of spirituality, it is usually seen in people with a strong belief in a world beyond this, as in reincarnation.