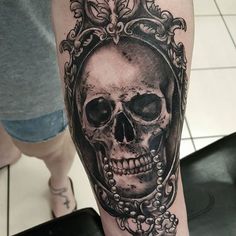 Welcome to the largest skull tattoo gallery on the Internet. Discover over 90 gorgeous skull…

Welcome to the largest skull tattoo gallery on the Internet. Discover over 90 gorgeous skull and skull tattoo designs. Browse between our pages to access all the images in the gallery.

Skull tattoos have always been one of the most requested designs by Art Tattoo fans. Many question this design as being a symbol of death or creepy. But it is also a design widely used by Rock & Roll and Heavy Metal singers or the most gothic people.

That is why we know that skulls are not suitable for all kinds of people. To some it transmits bad vibes, fear or disgust, while to others it causes a true cult, devotion and fascination.

It doesn’t matter if you are a man or a woman, skull tattoos will look great on your arms, your legs or your hips. You can do it with a piercing to give it a more rocky touch. Do it only in black or play with other colors so that your tattoo is not so scary.

The skulls combine with other designs such as flowers, leaves, flames of fire and everything that inspires you to express yourself. Some urban tribes made tattoos on their skulls and thus identify themselves with other subcultures. It is a form of exaltation to the mysteries of death.

On the Day of the Dead, in Mexico, skulls are an emblem of the tradition of honoring the deceased. For that occasion it is worth wearing ornate skull tattoos like the Catrinas. Despite being a taboo subject, death is a subject widely covered in music, painting, literature and also in body art.

Skull tattoos are not only an emblem of death. They also represent the positive side of her, like the passage to eternity. Each person gives him the representation that he chooses according to her philosophy or religion. Death has always been a subject of inspiration for many cultures.

Skulls, skulls and skeletons are very versatile designs that combined with other drawings can represent thousands of things. They can be worn on the arms, chest and even on the fingers. These are the skull tattoo designs that are always trending.

This skull tattoo design is ideal for Rock & Roll or Heavy Metal lovers. And of all those who see their inspiration in hell as some biker gangs. You can tattoo everything in black or paint the skull and flames in fire color to give it a more realistic touch. It can be complemented with piercings for an even tougher appearance.

If you want to get off the topic of death but don’t want to stop wearing your skull tattoos, you can adopt the pirate style.
Get a skull with bones that you can combine with various dark colors and grotesque designs.
It is ideal for men who work in the sea, the beaches or the docks. And in general for those who want to reaffirm their virility, show a rogue side or demonstrate strength and character in their group.

Day of the Dead Skull (Catrinas)

Followers of this Mexican tradition should try this design on their body. It generally consists of a woman’s skull with symmetrical and abstract features.
These types of skulls are known as Catrinas, they can be made in various colors and even combined with flowers. It is a very original way of always honoring your loved ones who left for the afterlife.

This design can be a burlesque representation of death or a symbol that we should not fear death because it is not our enemy, but a transitory process that we all go through.
You can do it in dark colors or add shades of blue and red and combine it with figures such as stars or geometric figures.

Love and death are two opposite poles but they can also go hand in hand. Skull tattoos combined with hearts are a very original design, it will like both romantic and sinister people.
You can combine a skull with red hearts or get a skull encased in a bloody heart tattooed. It is very common to see skeleton or skull tattoos that represent the union of a marriage, until death do them part.

Another romantic design that attenuates the dark. Skull tattoos with roses are among the most requested skull tattoo designs.
You can combine it with red or white roses and play with the sizes and positions. It looks great on both arms, fingers, legs or back.

Skull with roses and butterflies

This original skull tattoo represents the search for peace of the souls that have already left the body. The peace symbol can be tinted with the colors of your liking.
The moral of seeing what will be left of us at the end of our life. Thinking about it really makes any war worthwhile.

This tattoo is perfect for those who love the Gothic style or who see death from a religious perspective.
A good idea is to shade it with silver and dark tones. It is common to see skulls with hanging rosaries or crosses through them.

This design could well represent the biblical passage where Adam and Eve transgress God’s rule of not eating from the forbidden tree, induced by the serpent.
You can design the snake around the skull, under it, even coming out of the mouth.
Advantages of skull tattoos

Skull tattoos are a design that never goes out of style and supports any other decorative design. The skulls do not only represent the negative side of death, nor the spooky. If they are combined with other designs, they can be given a more positive and realistic meaning.

It is an ideal design for all genders and ages. It has always been the symbol of many urban tribes and rock singers, making it a perfect option for young rebels who want to have their own style.

Skulls can be combined with any other figure according to the style and perception of the wearer’s death. They give personality and their own style to those who like to tattoo their body.

With just a skull you can create wonderful works of art on your body. The key is imagination, creativity and putting yourself in the hands of a good professional. The second step is to design the tattoo accurately. After that you can have the most controversial symbol on the part of your body you choose.

If you have difficulty choosing your tattoo design, think of something you want to associate with death and put it on your body. Use your imagination to express yourself through tattoos and you will have your own business card in your neighborhood, your university or in your group of friends.