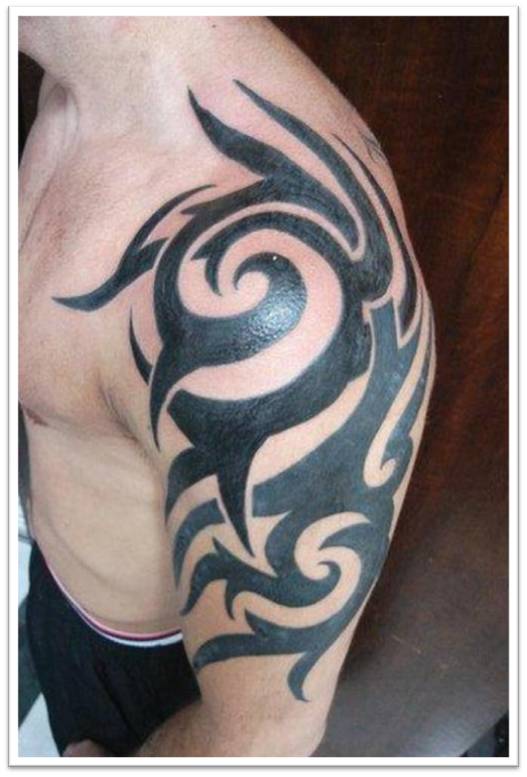 Next we are going to leave you some images with a few models of tribal tattoos so that you can choose the one you like the most or the one that catches your attention. As you will be able to notice, they are quite cool designs so it can encourage you to make your own.

Remember that one of its characteristics is the thick lines that usually end in a point, you can also notice how thorns are usually a fairly recurrent design in the realization of tribal tattoos.

The best designs with tribal tattoos

Certainly body art is a practice that has been in humanity for a long time. From the oldest tribes there is a record that they practiced the custom of engraving symbols and figures with ink on the body.

But this time we want to talk to you about a particular design, one that is currently widely used and that bears a tribal name, the truth is that many must already know it. Since this word is commonly used to refer to designs and figures that can be both tattoos and prints for t-shirts, vinyl for cars, among many other ornaments and decorations.

Knowing that tattoos are nothing new, much less something relatively modern, but rather it is a practice that easily takes several thousand years. We can easily verify this thanks to a mummy that is more than five thousand years old, and one of them had a tattoo, this being considered the oldest tattoo in the world.

In this first instance of tribal tattoos we can see as a common constant the use of long and pronounced lines, quite thick in reality, which commonly tend to end in a point.

There may be many who are imagining exactly what we mean. Why precisely this style had a great boom some thirty years ago when it became very fashionable. Especially tattooing in areas such as the shoulder, arm, chest and back. There were many celebrities of the time who wore this type of tribal that gives an air of a tough guy.

What are tribal tattoos?

Perhaps right now they are not the most sought after designs and figures by all those tattoo fans. Since the techniques and quality of tattoos have advanced considerably in recent years. But without a doubt there is always someone who ends up feeling completely identified by these figures. There are always nostalgic people who want to show off an old school tattoo, very vintage.

It was precisely these tribal tattoos, with great designs, some of the first to exist. This belonging to the customs of the traditions of primitive tribes and clans of antiquity, that’s where its characteristic name comes from.

The tribes with the greatest use of these types of tribal designs or body markings within their tribe members are the Polynesians, the Maori, as well as the Samoans.

It should be noted that despite the fact that it is represented in these civilizations where we can identify much more easily the tribal designs and figures that we know today.

It is well known that much older peoples and civilizations already had their own tattoo practices. With designs that were not far from what we were talking about on this occasion, one of these peoples was undoubtedly the Vikings.

Tribal tattoos in ancient times were commonly used as symbols to represent the bravery or courage of a warrior, in addition they were also used to invoke in one way or another the protection of some deities in which the tribes believed.

In addition to this, they could also be used as a symbol to mark the change from the young or childhood stage to a more adult one. Males who were brave on the battlefield or who demonstrated prowess in hunting were also practiced as a distinctive symbol of social status.

It is because of the latter that they have the wrongly preconceived idea that it was only men who had tattoos. And the truth is that this did not necessarily have to be the case, since in different regions and cultures many of the women and female members of the tribes could have their respective tattoos.

This type of case can be easily seen in some of the Oceania tribes, especially in Maori tattoos, since for them they served as a symbol that denoted social status, power or prestige of the person who wore it on their skin.