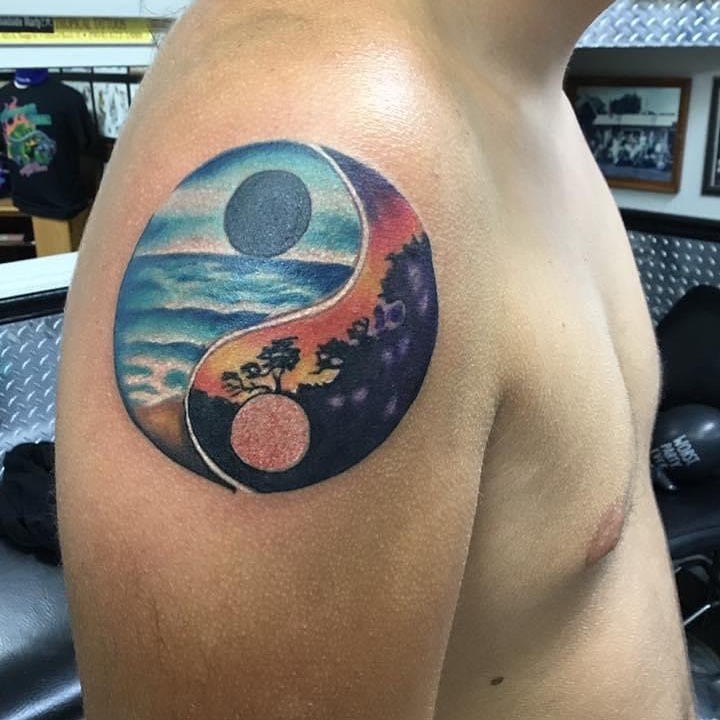 It is interesting the way in which many cultures express their ideas and beliefs in a simple drawing (and even word), such as yin yang tattoos, which aim to explain briefly without so many complications not only what a law of life can be but also the lessons learned over the years.

Yin and Yang is undoubtedly a symbol that most people know around the world for its basic colors, the simple shape it has and the definition of good and evil with which it has been known, but what? is that really the meaning of this iconic symbol?

Yin and Yang as a tattoo

Yin yang tattoos are undoubtedly worthy of admiration since, although they are basically the same tattooed in different parts of the body, creativity often accompanies their bearers or those who decide to tattoo this small piece, thus new colors and elements accompany them to make it stand out.

Although it is one of the pieces for which some choose, it is important to ask the question: What is this symbol? Where does it come from? What exactly does it represent within our culture, and even within any other culture?

It is known that this symbol is strongly linked with religion and its origin is located in the oriental culture, thanks to yoga and meditation it has gained recognition, enough for a large part of the population to get yin yang tattoos, but this recognition is also it owes what it claims to represent.

The duality, harmony and balance of every aspect in life; change and evolution, movement. Day and night, light and darkness are just some of the many examples to represent that duality and counterpart that each element of life possesses and that, thanks to it, manage to naturally balance and flow with life.

It is known then that this duality exists, but it is necessary to understand what the yin yang tattoos represent with their black and white colors rather than their general meaning; then, the black part known as the yin will represent the feminine principle linked to darkness, the moon and negativity.

However, the yin cannot live without the yang due to the imbalance that it would cause, therefore there is this counterpart represented in white and known as the yang, this principle represents the masculine, that which is related to light, the sun and the positive .

And even representing all that is light, clarity and positivity, the yang could not live without the yin. Undoubtedly for this reason that yin yang tattoos have an enormous relevance when one understands more about the spirituality and the duality of everything that makes up life.

They are a beautiful representation to wear on the skin and even more so when you have the opportunity to let creativity flourish and represent these elements in different ways without losing their essence or meaning.

Yin Yang with Koi fish: One of the most chosen resources in this style of tattoos, a very oriental ying yang with which it combines very well.

Yin Yang with Tribal: Animals are often used to fill in these tribal tattoos. The tribal looks great, on the dark side only the background is filled with ink and on the white side the lines to be tattooed are marked.