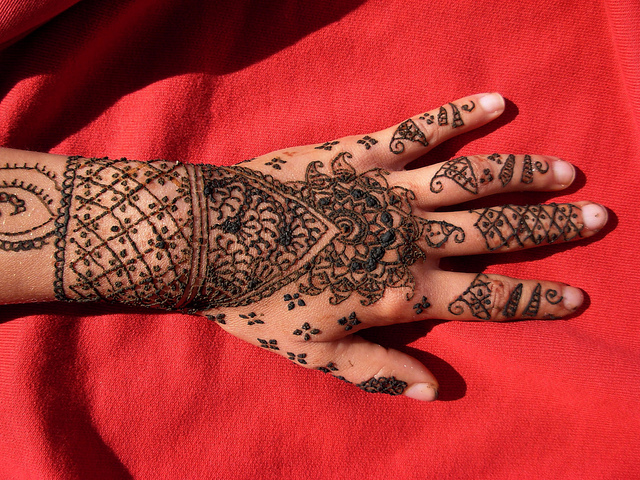 Welcome to our gallery of henna tattoos. We have more than one hundred images of designs made with henna. Browse between our pages to learn more about how this centuries-old technique works. It will also give you an idea in case you want to go for a temporary tattoo done with henna. They are tattoos used by women many times, especially when there is a wedding, an important event or a special celebration.

These fairly elaborate henna tattoo designs and patterns have been so popular that they are made in many parts of the world, today, many men and women go to tattoo shops with the aim of wearing them on their hands and feet.

One of the most beautiful and ancient customs in India is the practice of mehndi. Mehndi refers to temporary tattoo designs that are done for ritual purposes. These are always done in henna on the skin of Indian women usually before a wedding.

Moroccan Henna is a popular practice especially in Morocco, it is usually done in women of any age, it involves dyeing the hands or feet with henna as a general rule, although other areas of the body are also painted.

Henna tattoos applied to the skin temporarily are often done to celebrate special moments, such as weddings, Moroccan circumcisions and parties, on these holidays, women paint henna on their hands and feet.

Henna tattoos are temporarily applied to the skin in the form of a paste made of brown powder. Many women also tend to apply henna all over their hair, once a week. Usually once the tattoo is complete, it should be allowed to dry for several hours, without letting it get wet so that the tattoo can last longer without fading.

Unlike traditional tattoos, temporary tattoos with henna are embossed. As it is paint with which it is drawn on the skin before letting it dry and allowing it to remain for a while.

The application of this type of temporary tattoos is always used as something decorative on the eve of a special party or an important celebration. Like the one who does a hairstyle or waxes, since the effect is not permanent.

This type of henna tattoos for Moroccan culture is not only an aesthetic decoration of the skin. The symbols that are drawn have a meaning and symbols are often used to take care of the evil eye, witchcraft or in order to enhance fertility.

These patterns have a power known as the Baraka. The baraka has many meanings in Morocco, but it usually refers to a kind of positive power that protects against diseases and the evil eye.

There are many people who do not dare to get a permanent tattoo, as they think that later they may regret it or because of fear of needles or simply because they cannot bear the pain, that is why this is the right type of tattoo for those people because it is temporary. .

Henna is a plant called (Lawsonia inermis) from which the leaves are collected, dried and crushed into a fine powder that is used for dyeing, it is called henna powder. This is a large plant with small, scented white flowers that grows in hot climates, so we can find it in countries in Africa, Asia, and the Middle East, such as China, Morocco, India and Egypt.